Discovering the Paris Flea Markets or Les Puces de Saint-Ouen is like stepping back to another era; a place where time stands still; where labyrinths of curious vintage stores lure the onlooker with bright sparkly things and the promise of a bargain.  The Paris Flea Markets are so rich and enticing in their shambolic, seductive way that it is simply intoxicating to the lover of French vintage style; the only thing not on offer is enough hours in the day to explore everything! 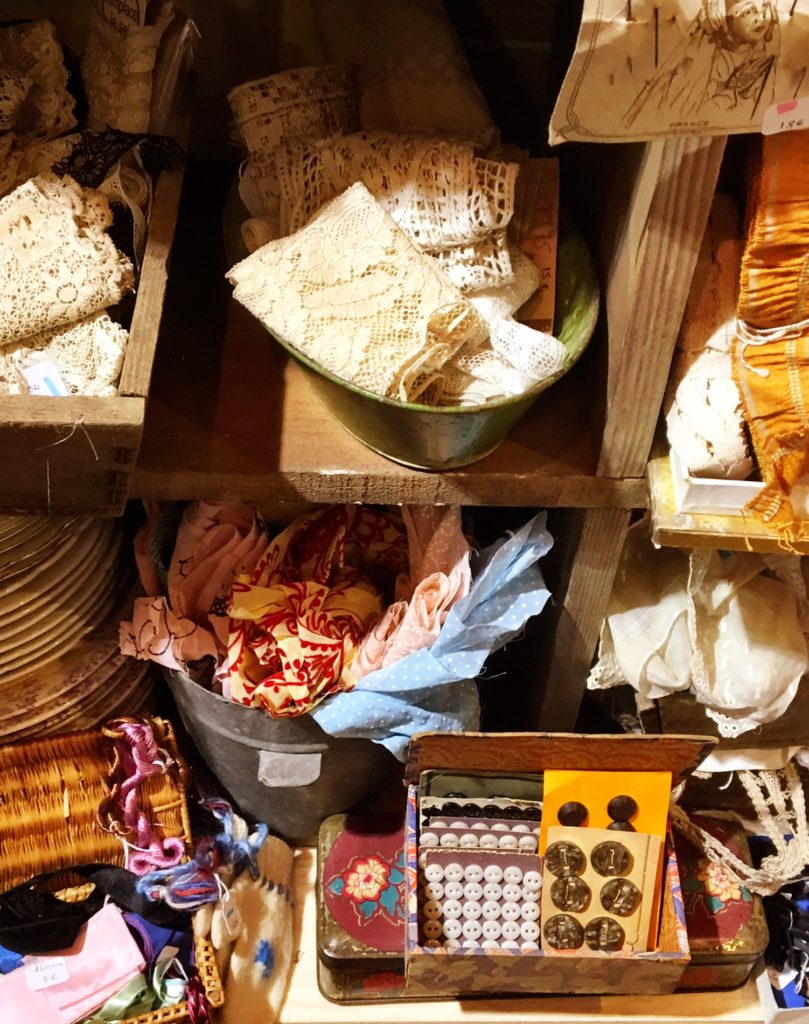 The Paris Flea Markets open each Saturday 9am to 6pm and Sunday from 10am to 6pm. They are found about 15 minutes walk from Paris’s Metro Porte de Clignancourt – the northern terminal of line 4 (fuchsia coloured). When you alight from the metro, head towards the concrete overpass and seek out Rue Des Rosiers. Go beyond the clothing and general market stores until you begin to see little narrow alleyways lined with almost shanty styled but neatly arranged stores. If you feel a little uncertain, just ask for ‘Rue Des Rosiers’ or Marche aux Puces. Most people around will know what you mean and point you in the right direction. 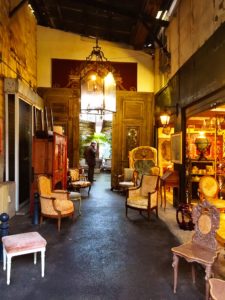 Some stores are themed with specific items where it’s easy to discern the contents such as linen and lace stores, sparkling chandelier stores, period furniture, vintage haute couture jewellery, coffee pots and grinders … and the list goes on in an ornate alluring manner. Other stores are more rambling and spring out at you in a dishevelled but equally way, so stuffed with amazing bric-a-brac, brocante, and memorabilia from the early 1900s to 1970s that it’s hard to contain the excitement and wonder – “who owned this piece?” 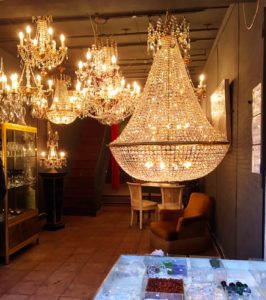 Two antique/vintage stores stood out for us: Les Deux Ourses and La table d’elo. Les Deux Ourses is owned by a gorgeous woman, Elizabeth, who sells vintage clothing and accessories. Les Deux Ourses stands for the two bears’ constellation and represents Elizabeth and her mother, which she proudly showed us through a vintage styled photo of the two of them in Paris when Elizabeth was barely five years old. Everything we touched was “haute couture” … “Lanvin” … “Dior” … “Yves St Laurent”, she told us. The store is filled with vintage clothes and jewellery and displayed so charmingly so that we wanted to try it all – I just had to stand back to admire; and it was such a marvellous moment. We giggled, and ‘oohed and aahed’ and eventually settled on some pretty beads, which I adore, and some Lanvin buttons for a corduroy waistcoat I had bought previously in Paris. Elizabeth was kind enough to let us take her photo, and with each pose she would gaze slightly towards the sky, as if she herself were haute couture. She was warm, and funny and we loved just being in her space. 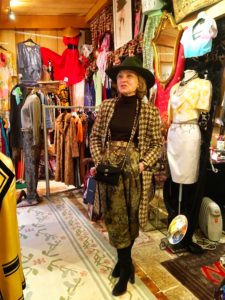 La table d’elo is a romantic kitchenware and vintage home decor store that is beautifully presented. Hand dyed vintage linen are creatively packaged with antique glassware, Limoges gold rimmed espresso cups, antique plates and flower arrangements adorn French oak tables and sideboards. Little cartes appear on the displays that were authentic menus from the 1920s. The store is so enticing we bought most of the glassware and a pile of the linens, and a small vintage school case in which to carry our newly acquired buttons and linens. 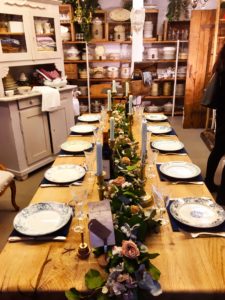 In the Paris Flea Markets I noticed it’s common to barter so we tried it a little. I think in hindsight we could have bartered more as many of the items are expensive for what they are. What my daughter thought was the price of a whole card of lace was in fact one metre only. And we should have checked some of the linens a little more carefully as a few had holes in it from a previous store we had dug through … and the 1960s umbrella we bought that was so pretty kept falling down on us, which was quite funny but annoying when we had to hold it in the rain. So be sharp when you are looking and don’t be afraid to gently suggest a lower price. 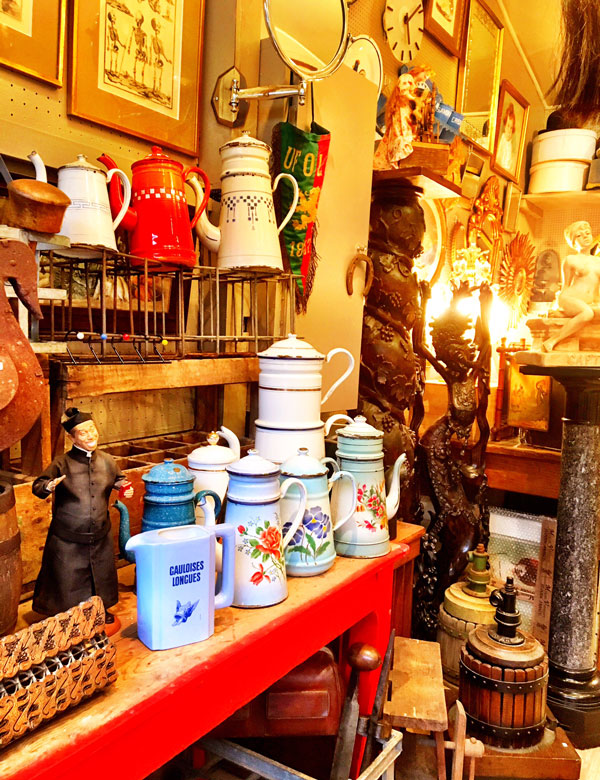 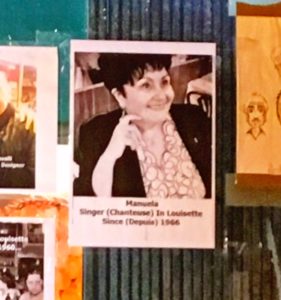 As we stepped outside after our long late lunch into the hazy dusk of a twilight setting, ready for just a little more vintage hunting we realised we had to return to La table d’elo where our glasses were being packed. Could we find it? Everything became a maze but one where we just kept discovering more treasures. It was like a dream or more realistically akin to Alice’s meeting of the White Rabbit, but so much fun. We were eventually directed to our store, having shown someone a picture of it that I’d already taken. We left, with suitcases of linen, glasses, buttons, sunglasses, beads and more, but most of all we left with memories that we will treasure forever.

Have you been … what treasures did you buy?

If you have any questions at all please email [email protected] I’d be glad to talk about it with you any time at all. 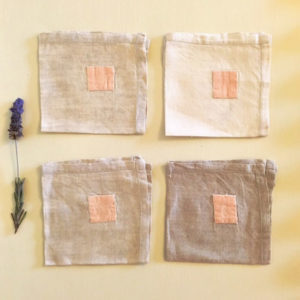