To discover the pleasure of the truffle – its rich earthy scent, its elusive yet moorish flavour, the folk who produce them and those who love them – is to enter a world that is grounded as it is hedonistic. It is to join the amorphous French Truffle Club.

I tasted my first serious French truffle at Chez Bruno in Lourges, Provence. We were to sit the tasting menu where each course featured truffle, not just a truffle oil, or a whiff or faint sliver of truffle, but big shavings of a particular variety – tuber Brumale (winter truffle) and tuber Melanosporum (black Perigord truffle). I had no idea whether I’d like it, and worried a little given the menu was all truffle, but I’d heard so much about this mysterious rabasse or ‘black diamond’ I had to try from the those who knew what they were doing, and Chez Bruno, owned by French chef Clement Bruno, with a character of gigantic proportions, was it. (Bruno is so passionate about his truffle that to enter Chez Bruno you must drive through two columns with large truffles atop). 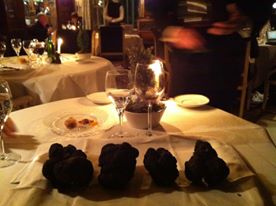 To dine at Chez Bruno is a rite of passage for the truffle purveyor.

The experience was so memorable, so mesmerising – it was like everything had come home to roost … it was Autumn leaves and warm log fires … Julie Andrews singing The Sound  of Music … my favourite jeans and rain on a tin roof. It was as if my tastebuds had found a place they been seeking for eternity; they’d found their soulmate; tasted all of the comfort food that my mother had ever served in one sitting, skipped the last fandango … fallen in love. So when I discovered Les Tres Bon, an authentic French Restaurant that runs cooking classes dedicated to the truffle I set off the following weekend to explore.

Run by master chef Christophe Gregoire and his gorgeous Australian wife Josephine, the restaurant is a little piece of Provence in a small province Bungendore near Canberra. The restaurant has grown very quickly to become somewhat of a Gallic haven for the starved Aussie/Francophile. It offers cooking classes, nights of Edith Piaf, featured French dinners and gourmet tours to Christophe’s home in Les Vosges or closer in New Caledonia.

During truffle season, Le Tres Bon serves decadent truffle dishes including Cassoulet with truffles and my favourite dessert Creme Brulee with truffles – again I almost died and went to heaven when i saw this dish. The classes run regularly and can be found at Le Tres Bon to book. However, if you can’t make it, Christophe has kindly shared with Little French Hearts his recipe for Truffled Snow Eggs.

Meanwhile, Truffle are journeying much further than the original fields of southeast and southwest France to regional areas of Australia with some serious associations managing the industry such as the Australian Truffle Growers Association. Festivals abound in the Winter truffle season months such as the Truffle Kerfuffle in Manjimup, Western Australia, Truffle Melbourne or the Truffle Festival and hunts in Canberra

And if you are seeking to join the Truffle Club, you can always visit your local French restaurant in hopes they also belong to the club. However, if all else fails there is always David Jones Food Hall in Sydney.