It’s not often I anguish over an auction or pine for a strawberry velvet sofa or a vintage pink four-leaf divider but when I realised the Ritz Paris Auction was over and every single item had been sold without me, I felt like I had missed out on the legend.

During a five day shopping and bidding frenzy held in Paris by auctioneers Artcurial between 17 to 21 April, more than 10,000 pieces – 120 years worth of history and memorabilia – were sold. The Paris Ritz had previously closed for two years to undergo a four year renovation. Each piece not needed in the makeover had been catalogued by a team of 10 people who had been locked in a secret Ritz warehouse for six months sorting pieces into themes. The hotel interior designer, Vincent Carre likened it to the hangars of Citizen Cane.

Amazingly nostalgic items included a photo of Coco Chanel standing between two Flambeaux to a sign from the Ritz Hemingway bar to the Ritz’s famous bathrobes. A sofa set from the Proust salon … paintings, chandeliers and French antiques, items from the bars, kitchen, beauty salon … door knobs … even the door signage to the exclusive Ritz Health Club were on offer.

And it seemed half of Paris, or perhaps the world, was watching, waiting and buying … in fact Euro 7.3 million Euros worth. Why? Because everyone wanted a piece of Paris, of the Ritz, of the myth.

As the opening of the Artcurial stated in its foreward:

“Since its inauguration on 1st June 1898, the Ritz Paris has embodied the elegance and intimate luxury synonym of the French “art de vivre”. The warm and glittering Ritz style was immediately adopted by celebrities from around the world, artists, crowned heads and top writers. All of them had their habits, contributing to the myth of the prestigious hotel on Place Vendome.” 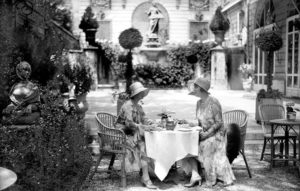 For the new owners, each item was stamped with a Ritz Paris insignia so that now in households and perhaps museums from up to 58 nationalities a little of the legend lives on. As Monsieur Carre stated: “It is exactly like the Paris we don’t see anymore … the Ritz is Paris”.

If you had been able to attend the Paris Ritz Auction what pieces would you have bought … a strawberry velvet upholstered armchair with a light pink cushion? 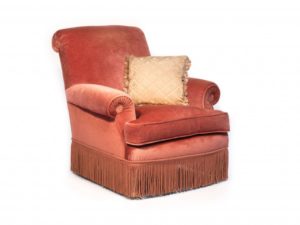